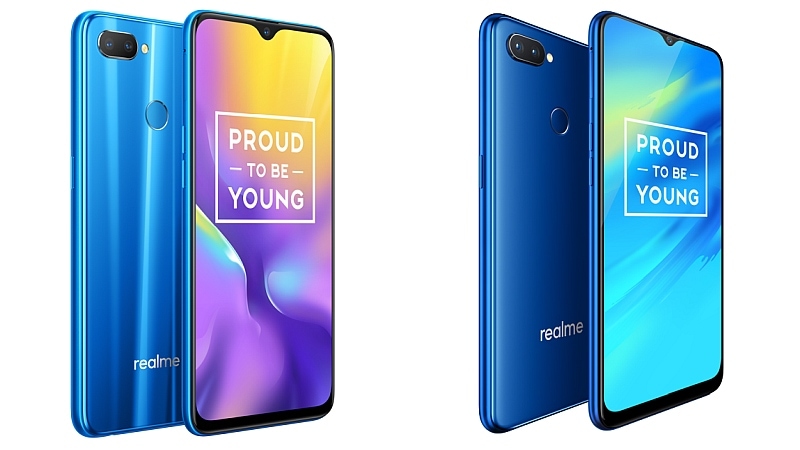 Realme 2 Pro vs Realme U1 price in India

Realme 2 Pro vs Realme U1 display

The Realme 2 Pro has an identical display, complete with the same Dewdrop-style display notch that contains the front camera and other sensors (ambient light sensor, proximity sensor, and earpiece).

Realme 2 Pro vs Realme U1 processor

The Realme U1 is the first smartphone in the world with a MediaTek Helio P70 SoC processor, one of its highlights. The octa-core processor is based on the 12nm FinFET process and is clocked up to 2.1GHz. It is paired with an ARM Mali-G72 MP3 GPU, and features a dedicated AI engine for offloading AI-based tasks – such as the numerous AI-based camera functions. The MediaTek Helio P70 SoC is coupled with 4GB of RAM on the Realme U1.

The Realme 2 Pro on the other hand sports an octa-core Qualcomm Snapdragon 660 SoC. It’s based on the 14nm fabrication process, clocked up to 2.2GHz. It features an Adreno 512GPU, and bears a Qualcomm AI Engine as well for offloading AI-based tasks – similar to the MediaTek Helio P70. The Snapdragon 660 SoC is coupled with up to 8GB of RAM on the Realme 2 Pro.

Realme 2 Pro vs Realme U1 cameras

The Realme U1 sports a dual rear camera setup, with a 13-megapixel primary sensor featuring a f/2.2 aperture, and 2-megapixel secondary sensor bearing a f/2.4 aperture. The rear setup is coupled with a LED flash. The company says the Realme U1 also comes with Portrait Lighting, Slo-Mo video (up to 90fps), AI Scene Detection, and Bokeh effect.

On the front, the company has used a 25-megapixel Sony IMX576 sensor, with an aperture of f/2.0, 1.8-micron pixels, and 4-in-1 pixels tech. The company is also touting a Backlight mode, which keeps both the background and foreground in focus despite bright backlighting behind the subject. An AI Beauty+ mode is also being touted, optimised for Indian complexions, featuring 296 identification point. There is also the Smarter Groupie feature that gives customised beautification for multiple subjects in a single photo. There is also an AI Face Unlock feature.

On the other hand, the Realme 2 Pro bears a higher resolution dual rear camera setup – a 16-megapixel primary sensor with an f/1.7 aperture, 1/2.8-inch Sony IMX398 sensor, 1.12-micron pixel size, and 6P lens. The secondary camera is a 2-megapixel depth sensor. The company is touting AI features for portrait mode, multi-frame noise reduction, and scene recognition. The Realme 2 Pro features a 16-megapixel front camera with an f/2.0 aperture, and the company is touting AI Beauty 2.0 for better selfies. The phone also supports AR stickers on both the front and rear cameras.

Realme 2 Pro vs Realme U1 battery

The Realme U1 features a 3,500mAh battery, and comes coupled with a 10W charger. The Realme 2 Prohas the same battery capacity, and the same charger. In our reviews, we found both phones lasted us a full day on a single charge. On the Realme U1, we also got a good runtime in our HD video loop test, where the U1 ran an HD video non-stop for 14 hours and 56 minutes. On the Realme 2 Pro on the other hand, we got a runtime of 10 hours and 22 minutes in our HD video loop test.

Realme 2 Pro vs Realme U1 other specifications

Realme 2 Pro vs Realme U1 design

Both the Realme U1 and Realme 2 Pro bear plastic bodies. The former is available in Ambitious Black, Brave Blue, and Fiery Gold colour options, while the latter comes in Black Sea, Blue Ocean, and Ice Lake colour options. Visually, both smartphones are very similar looking, with the Realme U1 featuring a slightly glossier back panel. As we mentioned, both smartphones have their fingerprint sensors on the rear panel. They both also bear their dual rear camera setups in a horizontal orientation. Both forego the notification LED on their Dewdrop-style display notch. Both also feature their 3.5mm headphone jack, Micro-USB port, and single speaker grille on the bottom, with the tops clean. The power button is on the right, and the volume buttons on the left, on both devices. The dual-SIM trays are on the left panel, which also feature the microSD card slots.