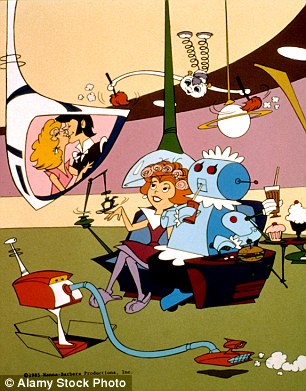 The gadgets we think of as home essentials have changed beyond recognition in the past few decades. In 1970, just 35 per cent of homes had a landline telephone and there were no mobiles.

Now, technologies that were once the stuff of science fiction are part of our daily lives: take Amazon’s Alexa – inspired by the talking computer on the Starship Enterprise in Star Trek.

Today, millions of British households own these ‘smart speakers’ that allow voice commands to control everything from TVs to lighting systems.

Indeed, as of this year, one in five households will be ‘smart’, with devices that are wirelessly connected to the internet, and controlled via smartphone or a hub.

By 2022, it will be closer to half of families relying in some way on them.

Meanwhile, devices once pronounced dead – such as vinyl record players – are catching a second wind in a new century, as families opt for higher sound quality (and pleasing looks) over the convenience of digital music.

Today’s best innovations offer a mix of retro appeal, connected convenience and bargain prices. But what really makes a gadget a must-have?

Good design and engineering is about solving a real problem in an ingenious way – approaching it from a new angle through the application of science, design, and engineering,’ says Sir James Dyson, who knows a thing or two about the subject: his dual-cyclone vacuum cleaners turned him into one of Britain’s best-known inventors, now worth an estimated £7.8 billion. He adds: ‘It is not easy, and the result should cause people to increase their expectations of technology.’

Dyson himself made more than 5,000 prototypes of his vacuum cleaner but his idea was rejected by all major manufacturers. It took 13 years before the Dual Cyclone became Britain’s fastest-selling vacuum cleaner of all time.

Despite this, he agrees that not all inventions are actually advances. ‘The term “gadget” is associated with novelty and conjures images of those gifts that are consigned to the back of a cupboard once Christmas is over,’ he says.

‘We should be very demanding when we choose the technologies and products to equip our homes – they should be useful and long lasting in their utility.’

With this in mind, we bring you our must-read guide to the 50 most innovative and best-value home gadgets on the market right now.

We’ve chosen a mix of performance and price, with something to fit every room in your house.