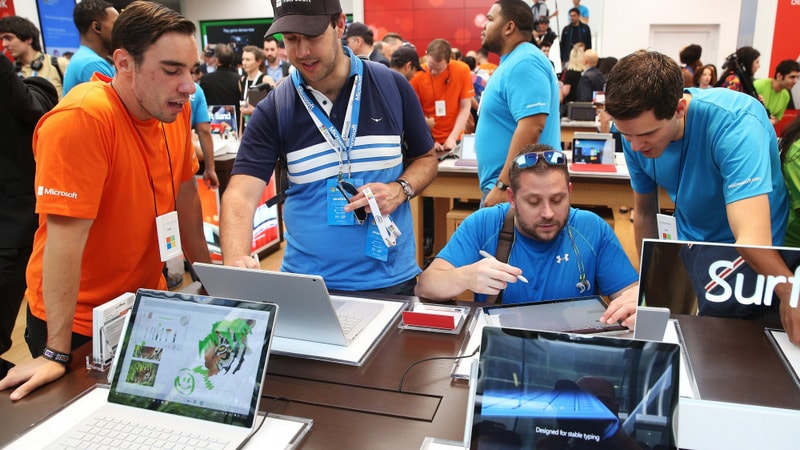 Microsoft Corp. is planning to release a line of lower-cost Surface tablets as soon as the second half of 2018, seeking a hit in a market for cheaper devices that Apple dominates with the iPad, according to people familiar with the matter.

Microsoft has tried this before. The software giant kicked off its consumer-oriented hardware push in 2012 with the launch of the original Surface RT. At the time, it was priced starting at $499 (roughly Rs.  33,800). After the tablets didn’t resonate with consumers and product reviewers, Microsoft pivoted to the more-expensive Surface Pro, a line which has gained steam and likely contributed to demand for a pro-oriented iPad, which Apple launched in 2015.

The new tablets will feature 10-inch screens – around the same size as a standard iPad, but smaller than the 12-inch screens used on the Surface Pro laptop line. The new Surfaces, priced about $400 (roughly Rs. 27,000), will have rounded edges like an iPad, differing from the squared off corners of current models. They’ll also include USB-C connectivity, a first for Surface tablets, a new charging and syncing standard being used by some of the latest smartphones.

The tablets are expected to be about 20 percent lighter than the high-end models, but will have around four hours fewer of battery life. The current Surface Pro can last 13.5 hours on a single charge, according to Microsoft. Intel Corp. will supply the main processor and graphics chips for the devices, said the people, who asked not to be identified because the plans aren’t public.

Microsoft has struggled to find a high-volume hit with the Surface devices as well as to introduce a flow of new choices to keep growth steady. In the fiscal year that ended last June, Surface revenue declined 2 percent as the company faced lower volume sales owing to an aging Surface Pro line. Revenue rose 32 percent in the most recent quarter, indicating new interest in Microsoft’s hardware.

Apple sold about 44 million iPads that generated almost $20 billion (roughly  Rs. 1.35 lakh crores) in revenue during the past four quarters. Microsoft’s entire Surface hardware business produced $4.4 billion (roughly Rs. 29,800 crores) for the same period. According to market researcher IDC, Microsoft sold almost 725,000 tablets in the first quarter of 2018, up 1.8 percent from a year earlier. That compares with 9.1 million iPads sold in the same period.

In March, Apple launched a new iPad model for $329 (roughly Rs. 22,300) geared toward education users. The new cheaper Surfaces could likewise appeal to students and teachers, and to schools that buy less-expensive devices in bulk.

The current professional-oriented Surface Pro lineup starts at $799 (roughly Rs. 54,100). Microsoft, which hasn’t finalized its plans, is expected to price the cheapest versions of the new device at about $400. Like the Surface Pro, these models won’t be bundled with the company’s keyboard cover. To go along with the lower-cost device, Microsoft is preparing less-expensive versions of its keyboard cover, stylus and mouse, the people said. The current keyboard cover costs an extra $160, while the new keyboard will be priced a bit lower, they said.

The company is planning multiple models, including versions with 64 gigabytes and 128 gigabytes of storage and models that can connect to LTE cellular networks, according to the people. It will continue to have the kickstand for upright typing and watching video. Like Microsoft’s other devices, it will run Windows 10 Pro.

Since 2015, Apple has rapidly added new productivity tools to the iPads, taking on Microsoft features like integration with digital drawing pens and using multiple apps at the same time. The company is planning on releasing a revamped iPad Pro this year with iPhone X features such as facial recognition, Bloomberg News reported last year.

Microsoft last released a device in the lower-cost category in 2015 with the Surface 3, which started at $499 and featured a 10.8-inch screen. The company stopped making it at the end of 2016.

The new line will be part of a growing ecosystem of Microsoft hardware products that, beyond the tablets, includes the Surface Laptop, Surface Book laptop with a detachable screen, and the Surface Studio desktop computer.