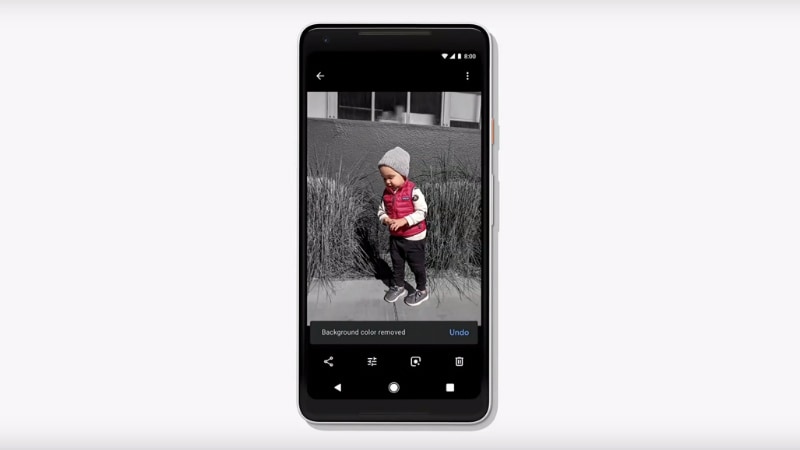 Google Photos has started receiving a new update that brings the advanced Color Pop feature to Android devices. As demonstrated at Google I/O 2018 last week, the feature uses artificial intelligence (AI) to transform background into black and white while continuing to show colours on the subject of the photo. The update is rolling out for Android devices. Separately, Google has confirmed that the object-removal technology that it showcased at the I/O developer conference last year will take some more time to reach the masses.

As highlighted by Google CEO Sundar Pichai during his I/O 2018 keynote, the Color Pop feature is designed to make certain pictures better by dropping the background colours – making them black and white – while popping the colour of the subject. The feature works only with select images – in which the subject is easily identifiable, reports Android Police. It is said to show images once their subjects identifiable within the Assistant tab and works with devices featuring Google Photos version 3.20 or above.

You can download the latest Google Photos app from Google Play or get its APK file directly from the APK Mirror to see how you can use the Color Pop feature on your memories. It is worth pointing out that since the feature transforms images through the Assistant tab, it doesn’t allow any manual implementation of colours or the black and white filter. Google may add an option to manually apply the colour pop effects in a later release. We were not able to see the Color Pop option despite having the latest build, and this it appears to either limited to a few users or those with eligible images.

That being said, Google Photos is growing as a standalone Photos app not across Android devices but also on the Web and on devices running Apple’s iOS. At this year’s I/O keynote, Pichai stated that over five billion photos viewed by Google Photos users each day. He also showcased Smart Actions that will leverage AI to recommend actions to users to improve their images.