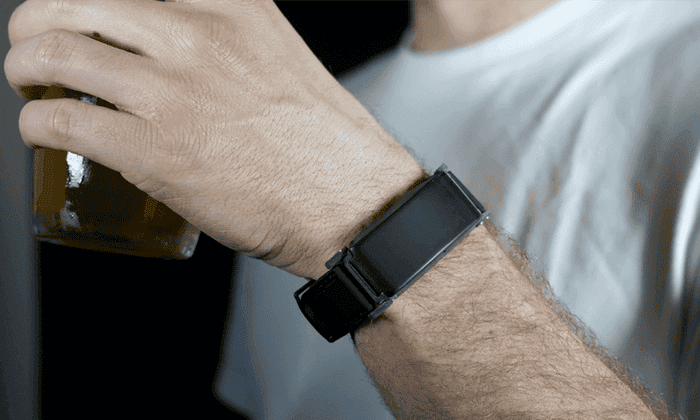 How many units of alcohol do you drink each week? It’s a question most people stumble over.

It’s not easy to monitor alcohol intake. So often a doctor asks and the patient tries to quickly calculate the recommended weekly units, before settling on a slightly lower figure. It’s an issue too for those who want to figure out whether they have reached drink-driving limits. But tech companies claim to have a solution to this problem.

The San Francisco-based BACtrack, for example, makes breathalysers for law enforcement agencies. But recently it won a $200,000 (£136,000) government prize for an alcohol-monitoring device of a different kind: one that users can apply to their bodies.

Skyn, BACtrack’s winning entry, looks like the sort of wristband runners wear to measure their speed and heartbeat – but it measures the body’s alcohol content. Three quarters of an hour after drinking, the Skyn’s wearer can see their blood alcohol content (BAC) on the wristband.

The prototype device, which will be available at the end of the year and retail for $99 (£68), works by tracking ethanol molecules escaping through the skin. It’s intended for “serious use cases – people with a serious alcohol issue who could benefit from continuous, non-invasive monitoring,” says Keith Nothacker, BACtrack’s president and CEO.

“Having a low-cost, small, discreet, wearable can dramatically simplify treatment for millions of people … Imagine going out for drinks and your smart watch displaying your estimated BAC. No pausing to take a breath test – the result is just there, continuously.”

The competition won by Skyn was organised by the National Institutes of Health (NIH) in the US. That a government agency is looking to incentivise alcohol-measuring gadgets suggests that the US government is trying to find new ways of preventing alcohol-related diseases, which cause about 88,000 deaths each year in the country.

It is also a nod to the fast-growing market for alcohol-measuring apps and gadgets. Among the many iPhone apps now available is IntelliDrink ($2.99/£2.29). Users enter the number of drinks they are consuming and the app calculates their BAC based on their age, weight, height, gender, drinking frequency and stomach contents. It can also be set to alert a friend when the user has reached a certain alcohol level.

Another iPhone app, R-U-Buzzed?, measures the user’s alcohol level using height and weight in addition to the amount of alcohol consumed, and flashes “You’re buzzed” when they reach the driving under the influence (DUI) level.

In Sweden, Alcosystems, a company working in collaboration with a teaching hospital has developed a wireless, fuel-cell powered breathalyser connected to an app, which recovering alcoholics are using several times a day to monitor their progress. The device is available for consumers and companies too. However, this is a relatively expensive option – while the app is £1.49, the breathalyser is €229 (£175).

The apps and gadgets form a useful new resource, says professor Eileen Kaner, chair of public health and primary care research at Newcastle University: “Many people drink heavily but don’t want to talk to their doctor about it. And a lot of patients worry about taking up too much of their doctor’s time trying to figure out how much they drink. Gadgets are useful in such cases.”

Indeed, many people consciously or unconsciously under-report their drinking in conversations with their doctor, and often have no way of backing up their self-reported drinking habits. “A product like BACtrack Skyn helps people become more aware of their alcohol consumption habits,” says Nothacker.

While apps and gadgets are no substitute for doctors and nurses, Kaner says they can help people find out more about their behaviour,. “A very small part of the population are alcoholics, but a much larger part are heavy drinkers. Tech solutions can help them address potential health problems before it’s too late.”

Some are more sceptical. “There’s no convincing evidence that tech gadgets are better than older techniques in changing behaviour,” says Professor Matt Field of the UK Centre for Tobacco and Alcohol Studies (UKCTAS) at the University of Liverpool. Besides, he adds, in most countries DIU levels are so low that it’s safer not to drink at all.